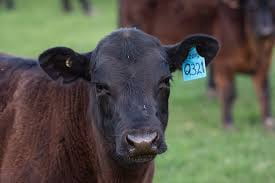 Cows first descended from a bull-like creature called an aurochs. Aurochs originated in India, then spread to China and the Middle East, eventually spreading into Northern Africa and Europe. The people started domesticating aurochs about 9,000 years ago, around 7,000 B.C.

The first cattle were brought to America by Christopher Columbus in 1493. Columbus took the cattle to the western hemisphere. Also, Hernando Cortez, another explorer, took offspring of the same cattle that Columbus took, to Mexico. Furthermore, Juan Batista de Anza brought 200 cattle to California so he could supply the California missions.

Today cattle are used for two main purposes. These purposes are meat and milk. Did you know that cattle produce about 25 billion pounds of meat each year? Holy cow, that is a lot! Cattle also provide people with leather and other by-products that are used to make different things. The hide from a full grown cow can make 144 baseballs, 20 footballs, or 12 basketballs. If you think that is a lot, think about this. The average American eats around 65 pounds of beef a year. Since there are around 327.2 million people in the U.S.A, that means there is around 21.268 billion pounds of meat consumed each year in the U.S.A!

Cattle have one stomach with four separate compartments. Each stomach has a different job that allows the cattle to digest their food. The digestive process of a cow is continuously regurgitating and chewing it again as cud. Since cattle thrive on grass, vegetation, and feed, they have to have this special digestive system. Cattle chew their cud for about 8 hours each day. When cattle are chewing their cud this means that they are healthy and happy.

Cow- Adult female that has produced a calf

Steer- Male animal that has been castrated

Heifer- Young female that has not produced a calf

Hope you enjoyed these fun facts about cattle!